Bratislava/Brussels – A daring protest high above the Slovak capital on Friday morning concluded an intense week of mobilisation across Europe against EU trade deals with Canada (known as CETA) and the US (known as TTIP). Greenpeace called on EU trade ministers meeting in Bratislava today to oppose the deals and put the protection of people and planet ahead of trade. 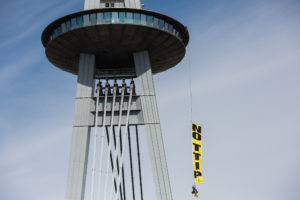 Ten climbers from Austria, Slovakia and Croatia scale Bratislava’s UFO tower over the Danube to display a banner reading “NO TTIP”, as ministers meet in the city below to decide the fate of EU trade deals with the US and Canada.

Photo/video footage will be loaded here.

Ten climbers from Austria, Slovakia and Croatia scaled the imposing UFO tower on the Bridge of the National Uprising over the Danube to display a 2.5 by 10-metre banner reading “NO TTIP”. The futuristic tower faces Bratislava castle and stands 85 metres above the old town, where the ministers are meeting.

Immediately before the tower protest, demonstrators representing a broad coalition of NGOs and trade unions marched in Bratislava to call on European governments to rethink the EU’s external trade agenda. Over the last week, hundreds of thousands of Europeans have demonstrated against CETA and TTIP from Berlin to Brussels, and Vienna to Stockholm.

Greenpeace trade campaigner Susan Cohen Jehoram said: “The ministers will have the chants of all the people who have taken to the streets ringing in their ears. They can protect democracy, our health and the environment, or they can allow powerful corporate lobbies to dictate policy through these trade deals. If they squander this chance they will sink Europe’s credibility even further.”

The ministers are expected to signal their country’s readiness to sign CETA and to discuss which parts of the agreement will apply provisionally – as soon as the European Commission and governments sign it, but before national parliaments are consulted. The ministers will also discuss the faltering status of TTIP talks, following damning comments from senior politicians in France and Germany.

One major area of concern related to CETA is the inclusion of ICS – the Investment Court System – allowing foreign companies to sue states if they feel their investments are constrained by regulation. This system and other CETA provisions undermine the right for governments to adopt and enforce laws which are in the public interest, warned Greenpeace. Any multinational corporation based in or with a subsidiary in Canada could use ICS to challenge regulation.

For breaking news and comment on EU affairs: www.twitter.com/GreenpeaceEU

Greenpeace is an independent global campaigning organisation that acts to change attitudes and behaviour, to protect and conserve the environment and to promote peace. Greenpeace does not accept donations from governments, the EU, businesses or political parties.