The Trade in Services Agreement (TiSA) is a proposed trade treaty among 23 Parties, including the European Union and the United States. The European Union is negotiating on behalf of its 28 member states, so the number of involved countries is now around 50, with Argentina and Brazil recently announcing their intent to join the TiSA talks. These countries include both rich and poorer countries, ranging from Australia to Pakistan. All TiSA parties are also a member of the World Trade Organization (WTO), which is the international body for trade negotiations and having already an agreement on service called GATS or General Agreement on Trade in Services. GATS exists since 1995.

The agreement aims at liberalising the supply of services such as public services and services related to energy, finance, healthcare, and transport. TiSA aims to include all service sectors except air-traffic rights and services that only governments provide, such as justice, policing or defence.

The global consequences of TiSA could be be disastrous, especially for developing countries joining the treaty at a later point. Unanimity vote among initial TiSA parties is needed if a new member applies for membership. Therefore new members of TiSA will be confronted with demands from all initial TiSA-Parties. 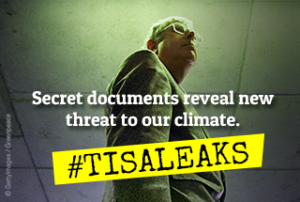