The Transatlantic Trade and Investment Partnership is one of the the world’s biggest ever trade deals, and will remove any remaining trade barriers between the EU and the US economies – while protecting foreign investments. The EU and US economies account for about half of the entire world’s GDP and nearly a third of world trade flows. As TTIP covers pretty much every sector of the economy, from farming to textiles, and IT to services, Greenpeace believes that this deal will jeopardise established environmental protections within the European Union.

Environmental protection and financial regulation will be negatively affected by TTIP, as will provision of healthcare and working conditions. Under TTIP multinational corporations will be able sue governments in special courts, where foreign investors can challenge what they see as regulations harming their investments. By signing the TTIP agreement, our national leaders would ensure to a reduction in living standards and the pollution of the environment, disrupting the lives of 500 million people on both sides of the Atlantic. 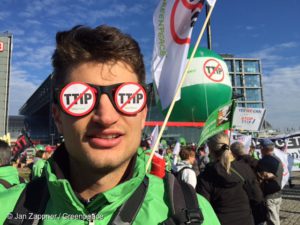